We’re glad to introduce GNM (Geographical Network Model) for GDAL and would like to share what it is about. GNM has been developed by Mikhail Gusev during Google Summer of Code 2014 under the mentorship of NextGIS. GNM intends to bring capabilities to create, manage and analyse networks built over spatial data in GDAL.

According to the concept any dataset (the set of spatial data of one format) can have the special set of layers and fields which holds the network’s data (e.g. network’s graph and metadata). Generally this set is either already defined like in PostGIS pgRouting, SpatiaLite VirtualNetwork, Oracle Spatial networks, topology in GML, or there is no such data in the dataset at all, like in ESRI Shapefile format. Though GDAL library provides an abstraction for spatial data of these formats it didn’t provide one for their “network parts” before. We developed the special set of classes and interfaces for GDAL which intends to “know” which data of the dataset refers to network data and how to operate it.

The key purpose of GNM classes and interfaces are:

The interface working with networks includes:

The separate set of classes in GNM is an implementation of described interface, and it is developed not for the concrete format but for any that can be represented as GDALDataset, i.e. for any currently supported by GDAL. Such support is not “native” for these formats and that’s why all network data is stored in the special set of layers and can be represented as the set of OGRLayer-s.

The ESRI Shapefile support was tested during the work on GSoC and it’s already possible to create and analyse networks in this format now. Specifically, it is possible to create network using the described above interface and after that do the following:

* To use the capability to “block” any amount of features in the network and using it in a combination with the described above methods to make, for example, a commutations analysis in a water pipe network (as at the pictures below). 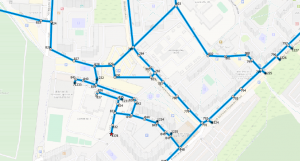 Picture 2. Water distribution in a network before the commutation (the source is marked as a star). 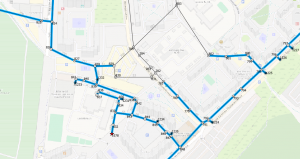 * To define the rules which will be used during the network’s topology (graph) construction: to make expressions for edge costs and directions calculations, to define the connectivity rules in the network.

The documentation is contained in the source code tree: GNM Architecture describes the purpose and description of all classes and interfaces, while GNM Tutorial describes the examples of using the new API.

In order to use the capabilities of GNM there were also developed some command line applications, which are included into GDAL:

GDAL fork with all changes: https://github.com/nextgis/gdal-gnm